A brief history. The collaboration of VW with Puch AG. Puch AG was a Austrian company that made bicycles, mopeds, motorcycles and automobiles as their main product. They did also have 4WD/allWD division that was known for their good quality and ingenuity. They build all of the synchro applications for VW and several other car and truck manufacturers in Europe. This VW Transporter Synchro is one of them. These vehicles were not common when new, and of course even harder to find today. They were produced in the period of 1979 to 1992.

This VW Transporter is just a bit new for my taste and the period I like to work with, but what the heck, they will become a real classic very soon. This Transporter have been sitting out in the woods in Sweden for ten years, and was completely green with moss when it was pulled out. Miraculously it have survived very well and it is just some exterior rust repairs that are needed, but these cars are difficult to work on because of the way they are constructed. The hole floor of this vehicle is in absolute perfect condition despite of the years in a damp Scandinavian forest.

This car consists of a huge amount of inaccessible cavities and areas that are difficult to repair in general. It must have been assembled in some kind of reverse order... At least, almost all body panels are still available on several VW sites, which make the work much easier. It demands a lot of work hours due to the complexity despite of being a essential simple construction.
I remember seeing these cars in the 80's and 90's on the roads as private and commercial vans/busses, and they rusted away faster than one could pour a cup of coffee. Therefore, 10 years in the woods may have saved it from the evaporation by salt process. To the credit of VW, they used a sealer in the wheel wells, assembly lines and exposed places, that is of absolute fabulous quality.

My job on this van is to only do the rust repairs, and the owner (he is the carpenter that made the woodwork on the DKW) will do the rest of the work himself. 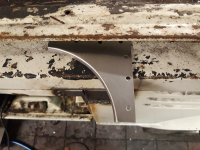 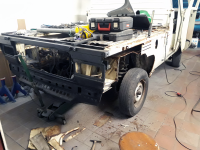 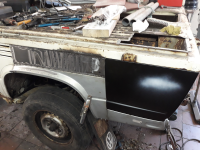 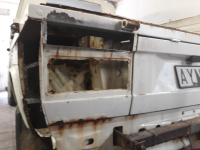 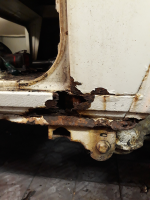